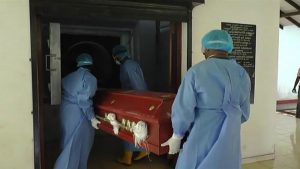 Rights group and activists accuse gov’t of forcing cremation of Muslim COVID-19 victims in disregard to WHO guidelines.

The forced cremation of two COVID-19 infected Muslims in Sri Lanka has sent shock waves among the minority community, which accused the authorities of violating Islamic burial rites.

Bishrul Hafi Mohammed Joonus, a 73-year- old man from the capital Colombo who died of COVID-19, was the second Muslim to have been cremated in the Indian Ocean island nation, which has registered 151 cases so far.

Bishrul’s son Fayaz Joonus, 46, said his father who had a kidney disorder tested positive for the virus on April 1 and died the same day. He was cremated the following day.

Fayaz said they could not perform congregational funeral prayers, called the Janazah, for his father due to fear of infections.

“My father was taken in a vehicle under the supervision of the police force and was cremated. We did some prayers outside the morgue, but it was not a Janazah that us Muslim typically do,” Fayaz told Al Jazeera.

“The government needs to make arrangements for us Muslims to be able to bury our loved ones in accordance with our Islamic burial rites.”

“If there is an option of burial, our government should accommodate. Cremation is not the only option, we want to bury our loved ones as per the Islamic way,” he told Al Jazeera.

Sri Lanka’s Ministry of Health on Tuesday issued COVID-19 guidelines saying the standard procedure of disposing bodies should be cremation. It reversed an earlier guideline that allowed traditional Muslim burial.

It also said the body should not be washed and placed in a sealed bag and a coffin, as against the Islamic practice of washing the body.
Amnesty calls on authorities to stop forced cremation

Muslim leaders and activists have pointed out that the World Health Organization (WHO) allows both burial or cremation for people dying due to the pandemic.

Prominent lawyer Ali Sabry said in a Facebook post that he was disappointed with authorities’ decision to cremate bodies of Muslims, as it was in disregard to the WHO guidelines, which say that a body can be either buried or cremated.

Out of the four people who died due to COVID-19, two were Muslims. The cremation of Muslims has caused anguish in the community.

“The Muslim community sees this as a racist agenda of extremist Buddhist forces that seem to hold the government to ransom,” Hilmy Ahamed, vice president of Muslim Council of Sri Lanka, told Al Jazeera.

“The guidelines issued by the WHO is practised by Britain, most of the European countries, Singapore, Hong Kong and all the Muslim nations [except for Sri Lanka],” he told Al Jazeera.

Amnesty International has also called on authorities to “respect the right of religious minorities to carry out the final rites” according to their own traditions.

“At this difficult time, the authorities should be bringing communities together and not deepening divisions between them,” Biraj Patnaik, South Asia director at Amnesty International, said in a statement.

“Grieving relatives of people who have died because of COVID-19 should be able to bid farewell to their loved ones in the way that they wish, especially where this is permissible under international guidelines.”

Muslims account for 10 percent of Sri Lanka’s 21 million population. But their relationship with the majority Sinhala Buddhists deteriorated in the years after the end of civil war in 2009 during which hardline Buddhist groups were blamed for several attacks against Muslims’ businesses and places of worship.

Following the deadly attacks in April 2019 that killed more than 250 people, Muslims have faced increased hostility from the Sinhala majority.

A little-known Muslim organisation was blamed for the island nation’s worst attack since the civil war fought between the government forces and the Tamil separatist fighters.

“This is just to hurt the feelings of the minority,” Azath Salley, leader of the National Unity Alliance political party and the former governor of Western province, told Al Jazeera.

The method of the disposal of the body has become a big talking point in the country, with a section of the media accused of running “anti-Muslim hysteria” and pointing fingers at Muslims for the spread of the virus.

Nalaka Gunawadenne, a media analyst said amid the COVID-19 pandemic, it is very disturbing and disheartening to see anti-Islamic sentiments and anti-Muslim hate speech “raise their ugly head again in Sri Lanka”.

“This is national and global emergency shared by all humans, and not a time highlighting our cultural divisions. The coronavirus does not care about our ethnic or religious differences. We need to fear the virus – not each other – and unite in containing and battling the disease.” he told Al Jazeera.

Government officials from the health services department did not respond to repeated calls from Al Jazeera for comment.

Meanwhile, Fayaz, who is in a makeshift quarantine centers in Punani in the eastern province, said he did not inform his mother of his father’s death and cremation.

“She has heart disease and we don’t want to risk it. She won’t be able to bear it.”