Is Sri Lanka On It’s Way To Becoming A Dictatorship?

A new infographic reveals how President Gotabaya Rajapaksa is ruling Sri Lanka, as if he is autonomous, through powerful militarised task forces that bypass the usual checks and balances of a democratically elected parliament. These bodies are unelected and report directly to the President requiring the full cooperation of the Sri Lankan civil service and are not subject to the usual scrutiny and oversight of parliament. Not just secretaries but Ministers (currently 16) and ministerial committees will have to serve and obey these unelected bodies and if they don’t will be referred to the President with unspecified consequences to their careers. This is made more worrying because of the forthcoming parliamentary elections in which the President hopes to gain a two thirds majority to be able to alter the Constitution.

“The Task Forces risk creating a parallel state and potentially give the President, his family and former military comrades unparalleled control over patronage networks and the use of public assets,” said the ITJP’s executive director Yasmin Sooka. “More worrying is that this new schematic for exercising control could survive beyond the next elections, which are anyway expected to return a parliament compliant and subservient to the Rajapaksa family”.

The President is allegedly allocating government funds and operating directly on a Budget on Account enabled by the absence of a sitting parliament for more than three months. According to the Sri Lankan state run newspaper and other media, approximately half the funds this quarter have reportedly gone through the Ministry controlled by his brother the Prime Minister, Mahinda Rajapaksa, and ten percent to the Ministry of Defence, headed by Major General Kamal Gunaratne, with no apparent independent oversight.

“The latest developments centralise power and give even more untrammelled authority to the President’s key military allies who already enjoy enormous power through formal appointments,” said the ITJP’s Executive Director Yasmin Sooka. “This is the ‘deep state’ coming into the open,” she added. “It’s a structure of governance reminiscent of the President’s early role as an all-powerful district military coordinator during the crushing of the JVP in 1989 in Matale; he appears to be replicating this model of unfettered control over the entire nation”.

Lawyers in Sri Lanka have argued that the establishment of the Task Forces is legally questionable and administratively murky. The task forces have no time limit, while the drafting is sloppy and ungrammatical. The name itself – task force – is redolent of militarism and the composition of the bodies is overwhelmingly military, male, Sinhala and unelected, save for the bureaucrats who are included, whose only role is to execute the commands of the Task Forces.

Members who are Civil Servants

It is worth noting some of the bureaucrats in the Task Forces were under investigation reportedly for corruption during the last government.

* The Secretary to the Presidential Task Force to build a Secure Country, Disciplined, Virtuous and Lawful Society is Senior Assistant Secretary, Ministry of Defence, D.M.S. Dissanayake. The Attorney General’s office considered DMS Dissanayake to be a suspect in one of the cases involving the Avant Garde floating armoury which was established by Gotabaya Rajapaksa when he was secretary of defence. In 2019, the Attorney General ordered the arrest of DMS Dissanayake who had been working under Gotabaya Rajapaksa in the MOD, but subsequently charges were withdrawn.

* The Presidential Task Force in charge of Economic Revival and Poverty Eradication:

One of the secretaries to this important economic Task Force, D.S. Jayaweera, was reportedly investigated in 2012 by the Commission to Investigate Allegations of Bribery or Corruption for allegedly submitting a bogus certificate claiming a doctorate from a University in USA. He was then again investigated in 2016 over alleged misappropriation of funds (Rs.5.7 m) while Director General of the Sri Lanka Tourism Development Authority.

Another member, S.B.Divaratna, retired Deputy Secretary to the Treasury, should have been investigated regarding the lack of sufficient food supplies sent to the Vanni while he was Commissioner General of Essential Services in the last days of the war, resulting in a United Nations report alleging deliberate starvation. He was also a member of the Cabinet Appointed Tender Board for the controversial MIG fighter deal exposed by journalist Lasantha Wickrematunge who was later assassinated in 2009. Ahimsa Wickrematunge filed a damages case in California against Gotabaya Rajapaksa in 2019 under the Torture Victims Protection Act alleging the former secretary of defence (now President) was responsible for ordering the killing of her father in 2009.

There are two additional members against whom allegations of involvement or knowledge of irregularities have also been levelled in the Sri Lankan media, which they deny.

* The Presidential Task Force to direct, coordinate and monitor the delivery of continuous services for the sustenance of overall community life, which is now replaced, included:

Secretary to Prime Minister Mahinda Rajapaksa, Gamini Sedara Senarath, whom Sri Lankan media reports said was charged in 2016 under the Penal Code, the Prevention of Money Laundering Act and the Public Property Act, but then acquitted in August 2019 from charges of misappropriation of state funds.

Another member was Dr. Priyath Bandu Wickrema, Secretary, Ministry of Urban Development, Water Supply and Housing Facilities, whose portfolio falls under the Prime Minister, Mahinda Rajapaksa. Wickrema faced a corruption case in November 2019 after the Bribery Commission alleged that he had unlawfully employed 319 employees for election work around October 20, 2014, and January 7, 2015, while he was serving as the Ports Authority Chairman. The final outcome of this case remains inconclusive.

It is worth noting that investigations were initiated by the former government into alleged corruption by officials in the first Rajapaksa government (2005-15), some of which investigations are now being themselves investigated by a new Presidentially-appointed Commission looking at alleged political victimisation. In addition, charges were dropped against several suspects just before the presidential elections in November 2019.

Members who are Military

Significant is that military members of President Gotabaya Rajapaksa’s inner circle have held multiple positions, in two or even three of the Task Forces, as well as holding other powerful government positions.

* Retired Major General Kamal Gunaratne is chair of two of the new Presidential Task Forces. He is also secretary of defence and when President Gotabaya Rajapaksa came to power he was assigned 31 key state institutions to his control.

* Retired Major General Sumedha Perera is a member of two of the current Task Forces. He served under Gotabaya Rajapaksa in the Gajaba Regiment in 1989 when the President was District Military Coordinator in Matale at a time when 700 Sinhalese were allegedly reported disappeared in state custody in the District.

* Lt. General Shavendra Silva, who also served in Matale under Gotabaya Rajapaksa, sits on two of the Task Forces as well as holding the two most senior military posts in the country. As 58 Division Commander he was a key officer in the 2009 war when Gotabaya Rajapaksa was the powerful secretary of defence. He is designated for alleged gross violations of human rights by the United States Government.

President Gotabaya Rajapaksa’s key trusted lieutenants are public servants who hold critical positions in the State – with control of the military, the ministry of defence, intelligence, key police departments, customs, ports, prison vocational training. This new structure outside of parliament allows them to exercise power and control over the economy, security, media and all key aspects of life.

In addition, three of the President’s brothers are directly involved in running the country:

* Basil Rajapaksa chairs the Economy Task Force. He too was investigated in five cases for alleged corruption under the last government. He is a dual US Sri Lankan citizen, and is not elected but acts as the President’s Special Envoy.

Before the Task Forces were appointed, local news reports said the Rajapaksa brothers were reportedly in control of 145 state institutions – 88 alone in the hands of Mahinda Rajapaksa. This is despite Gotabaya Rajapaksa’s manifesto promise that, “All appointments as heads of State institutions, corporations and statutory boards, and appointments to Boards of Directors will be based on merit and leadership abilities”.

Nepotism. patronage and militarisation are the characteristics of the new government in Sri Lanka with power consolidated following the elections.

2. Presidential Task Force to direct, coordinate and monitor the delivery of continuous services for the sustenance of overall community life.

3. 1 and 2 replaced by: Presidential Task Force for Economic Revival and Poverty Eradication.

4. Presidential Task Force to study and provide instructions on measures to be taken by all Armed Forces to prevent Coronavirus infection among members of the Tri-Forces .

7. The Presidential Task Force for Archaeological Heritage Management in the Eastern Province

8. Multipurpose Development Task Force (not a Presidential Task Force but created by the President). 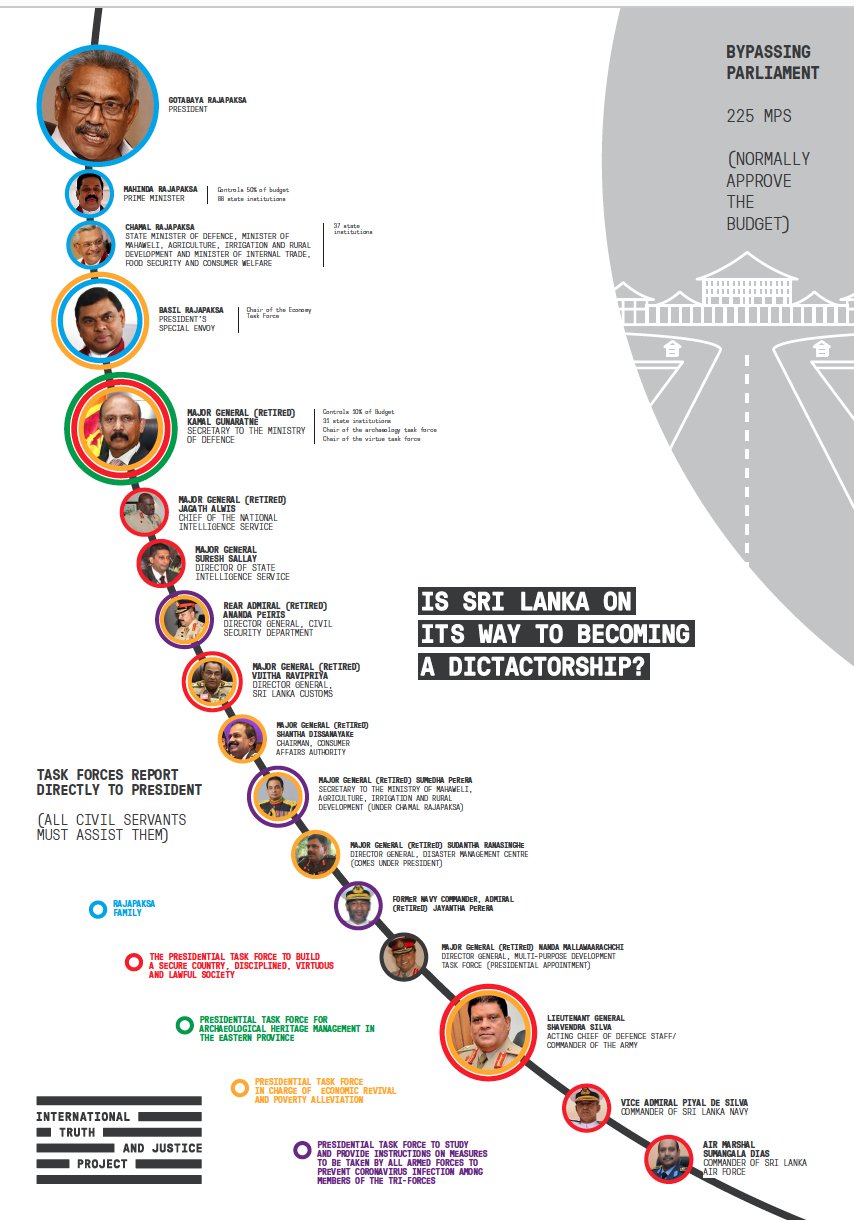