PRG expresses its deep shock and dismay over the appointment of the Presidential Task Force on ‘One Country; One Law’

People’s Rights Group (PRG), a rights based advocacy and lobbying group based in the UK particularly dealing with human rights violations in Sri Lanka, expresses its strongest concern and deep shock over the recent appointment by the President, under Article 33 of the Constitution, of a 13-member task force to study and prepare legislation to give effect to the ‘One Country, One Law’ concept, thereby seeking to re-invoke the ethno-nationalist mandate it received at the presidential and general elections in 2019. PRG also views with equal concern, the appointment of Galaboda-aththe Gnanassara Thero, an unapologetic champion of ethno-nationalist rhetoric and anti-Muslim hatred, with scant regard for the rule of law, to lead this Task Force, which further casts doubts on its competence and credibility. This sinister appointment in itself is a parody of the very commission, and an affront to the Muslim community, given the history of this key protagonist in the play.

The concept of ‘One Country- One Law’ is more profound and ought to mean that the country’s laws are applicable to each and every individual with equal force regardless of rank or position, ethnicity or religion. However, this appears to have a very specific majoritarian connotation, and is thus by no means an expression of a desire for equality or the equal protection under the law, In this context, the appointment of this Presidential task force needs to be challenged due to both the nature of its composition and mandate. Significantly, the 13-member task force also does not include a single woman, Tamil or Christian and therefore does not represent the plurality of Sri Lanka’s multi-ethnic, multi-religious and plural society.

A cursory glance at the underlying purpose, constitution and timing behind establishing this mechanism clearly reveals mala-fide and sinister motives as well as racist and anti-Muslim footprints, which was further confirmed by Gnanassara Thero himself, at the recent press conference, when he responded to a question about the lack of Tamil representation. He said, “it was not deemed necessary to appoint a Tamil to the PTF as such, because the concentration of the panel would be on the controversial laws of the Muslim community, such as those on marriage and divorce, on the wearing of the burqa, the existence of separate Qazi courts and Madrassahs (religious schools). A number of Muslims have been appointed to the PTF for tapping their expertise on Islamic laws”. Interestingly, there appear to be no qualified Muslim legal or adequate theological representation in this task force. Thus, this is a divisive move which will not make any meaningful contribution in upholding the values of equality, fairness, non-discrimination, protection of law as well as humanitarian values enshrined in the Constitution.

Further, this Task Force and the mandate given to it are seriously contradictory to the pledges given by President Gotabaya Rajapaksa at the UN General Assembly in New York and Foreign Minister Prof G L Peiris at the UN Human Rights Council in Geneva to energise the national reconciliation process by following principles of accountability and restorative justice, among others, and to work in cooperation with the UN and international community to these ends. Many civil groups and bodies have spoken out loud and clear about the unconstitutionality and the negative implications of this ill-thought move. Significantly, the Centre for Policy Alternatives (CPA), a leading human rights advocacy group in Sri Lanka as well as The Bar Association of Sri Lanka (BASL) have both expressed strong reservations about the measure, in view of its very divisive public policy agenda , which ‘would usurp the functions of many institutions established under the Constitution and the law, including Parliament and the Ministry of Justice’

PRG therefore calls upon the Government of Sri Lanka to immediately rescind this divisive decision to form this Task Force, adopt a more democratic and consultative approach to governance, take all steps to uphold the rule of law and respect the fundamental rights enshrined in the Constitution, which unfortunately have been observed in the breach, leading Sri Lanka to slide towards majoritarian authoritarianism as well as face international condemnation. 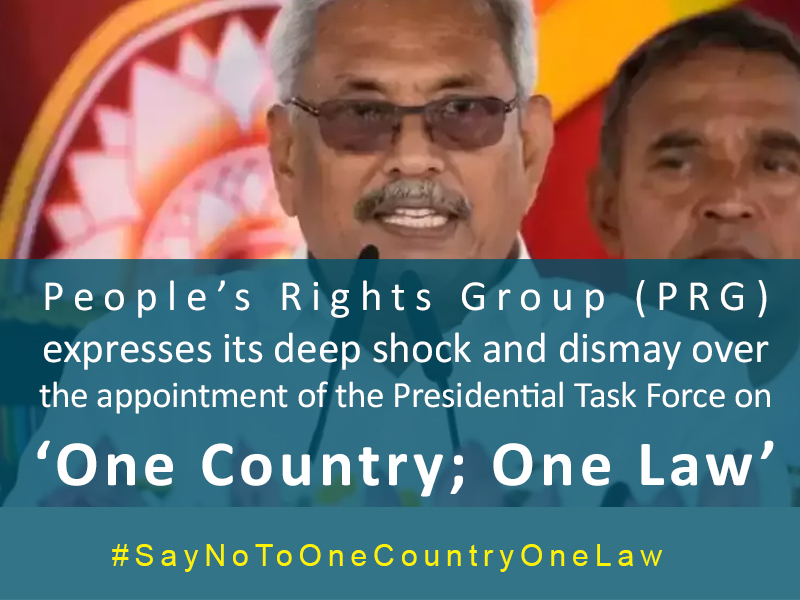