Sri Lanka at the Crossroads! 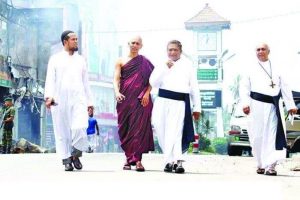 The Easter Sunday massacre was certainly a shocking tragedy. What happened that morning when a spate of senseless killings and terror attacks on innocent civilians took place, as the Christian brethren were engaged in reflection and prayer, deserves severe condemnation by people of all faiths, which brought back ugly memories of the bloody chapter of an inhuman war which engulfed Sri Lanka for over three decades in its’ recent history. It is the height of depravity to target worshippers on their holiest days, proving that terrorists have no race or religion and perpetrators of these terror attacks speak for no one but themselves.

It was to the credit of majority of our people, who maintained peace despite this gravest provocation and the exemplary leadership provided by Rev. Cardinal Malcolm Ranjith in this regard deserves our sincere admiration, which averted a major bloodbath as well as maintaining law and order. Muslims, stood with other communities, in strongly condemning this tragic massacre and have also been organizing many vigils and getting heavily involved in raising funds for rehabilitation of the victims. They also fully cooperated with the law enforcement authorities to investigate and apprehend most of the terror suspects. The families so affected indeed deserve our unreserved support and consolation. So does our wounded motherland too, which needs healing and our people should stand together in solidarity to ensure that these types of atrocities and tragedies will never ever happen.

However, it was a shame that media sensationalism and hate as well as disgruntled political elements are making the entire Muslim community guilty by association and making them feel alienated. Two weeks into the tragedy, another tragedy thus struck Sri Lanka, with the prevailing relative calmness vanishing, when shocking acts of opportunistic criminality and vandalism were witnessed, when freely roaming mobs consisting of youth armed with batons and swords, set fire to and ruined several, mosques, houses, local businesses, shattering streets and making people feel unsafe in their own homes, also causing the death of a Muslim businessman. Many fled their homes to hide in jungles and they said that their parliamentarians were not available to contact. The worse aspect of this tragedy was that the reported hate attacks were carried out under the cover of the curfew, when the Muslim were indoors or hiding in fear, More-so, there were allegations of complicity on the part of some sections of the law enforcement authorities as well. There appears to be a set pattern in motion, bringing back memories of racist ghosts of two earlier anti-Muslim communal violence in Aluthgama and Digana in 2014 and 2018 respectively. None of these earlier tragedies were duly investigated, culprits punished or due compensation paid to the affected families.

The Muslim community in Sri Lanka has thus been living in increased fear and with a deep sense of insecurity since. They strongly feel that the government did not take appropriate timely action to prevent this spate of hate attacks and therefore the government should be held to account for their failure to protect Muslim rights and security as per its’ obligations under the State’s constitution and UDHR.

Sri Lanka is at the cross roads of history. Muslims have lived in amity with other communities for over ten centuries. Their crucial contribution to secure Independence and to defeat the Tiger terror and to the economy cannot be ignored. Muslims also provided vital prior information about this radical group involved, to the authorities too which was virtually ignored. It is therefore a shame that their vulnerability is being exploited to make them feel alienated and second class citizens.

Undoubtedly there are many areas for Muslims to look inwards in the light of the recent developments and the community should make use of this opportunity to do so and make amends. However, their dignity and self respect as equal citizens in the country of their birth cannot be allowed to be compromised and therefore should be respected and protected. The Muslims too, on the other hand, should veer away from the defeatist mentality and stand side by side with their brethren of other communities and be part of the initiatives to make Sri Lanka shine as an inclusive ‘Pearl of the Indian Ocean’.