Denying Burial Rights to the Sri Lankan Muslims – Contradicts WHO Guidelines and Self Defeating! 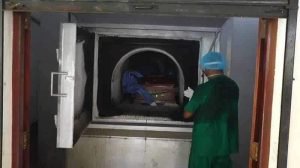 The Government of Sri Lanka(GoSL), withdraws the option which was available under Public Health Guidelines to allow the burial of the deceased Covid-19 victims,  which adversely affects the religious rights of the Muslim Community of Sri Lanka. This adverse decision was taken contrary to the guidelines issued by the World Health Organisation (WHO) relating to the disposal of bodies affected by the Corona Virus, which are being followed by many countries, including United Kingdom, Singapore, Australia, Israel, Malaysia, Iran and Italy. In the absence of any scientific evidence of spread of disease after the body has been sealed in a body bag from respiratory or gastrointestinal fluids (and therefore there is no difference in cremation or burial with regard to spreading of the virus), this decision appear to be taken on other considerations. This will continue to  cause much anxiety and anguish to the affected Muslim families in particular and the community in general.  The GoSL should therefore reconsider reintroducing the amendment to provide the burial option too with strict conditions to avoid infection spread, as provided in the WHO guidelines, in addition to the cremation option. 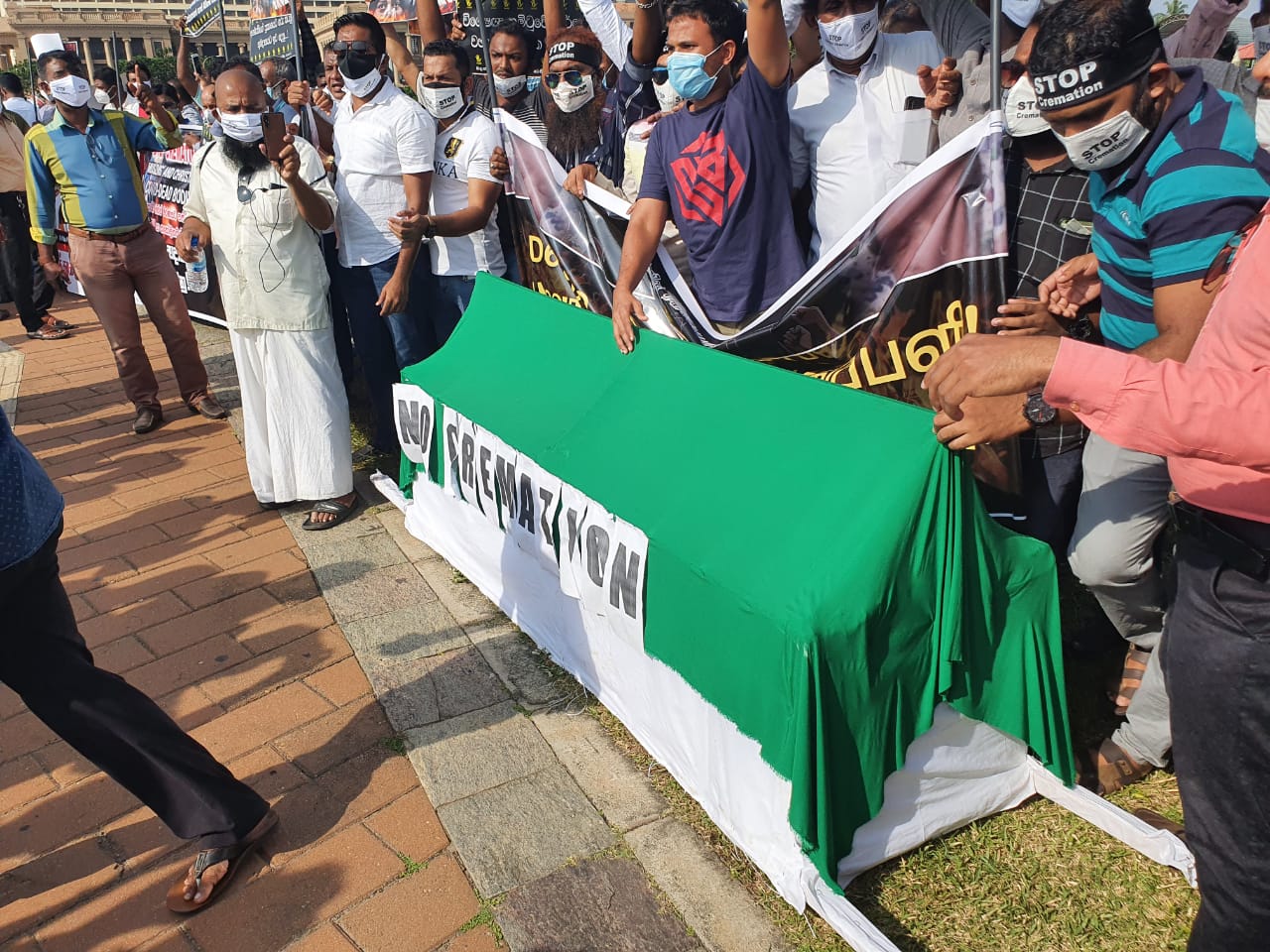 OP-ED: Bangladesh must speak out against forced cremation of Muslims in Sri Lanka

Head of Govt appointed committee Prof. Jennifer Perera stands by its recommendation that both burial and cremation can be allowed for COVID victims

PM’s Statement on Permission of Burial for Covid19 Death’s is NOT True: PM Office Senior Staff responds to the query by The Leader

PM’s Statement on Permission of Burial for Covid19 Death’s is NOT True : PM Office Senior Staff responds to the query by The Leader 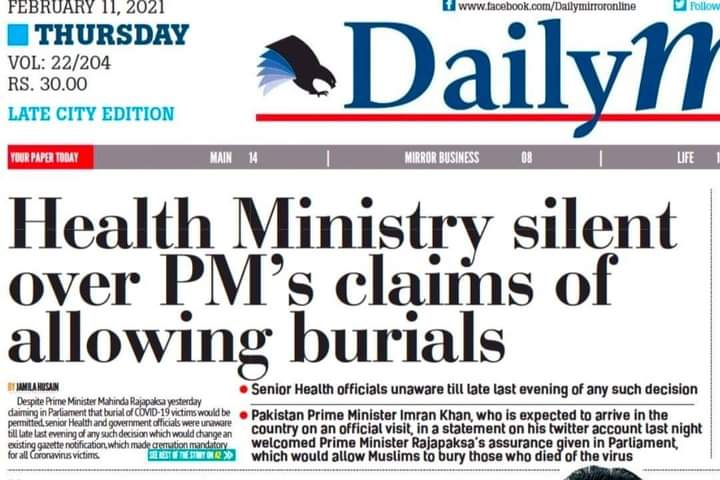 The segment on forced cremation starts around 28mins into the show.

Sri Lanka to allow COVID burials for Muslims after outcry

Mandatory cremations and the voices of the families

Mandatory cremations and the voices of the families

The Muslim Council of Britain (MCB) has submitted a complaint to the United Nations Human Rights Council (UNHCR) given the Sri Lankan government’s ongoing policy on forced cremations.

Zara Mohammed, the Secretary General of the MCB said:

Tayab Ali, Partner at Bindmans LLP who represents the MCB and the Applicants said:

“The forced cremations of Muslim bodies in Sri Lanka are a serious violation of the religious freedom of a minority group. It is a violation of international law to delay returning a family member’s body for burial in a timely way unless there is good reason to do so. In this case the Sri Lankan authorities have departed from the WHO’s recommendation for the safe management of a dead body during the coronavirus pandemic without any justification. Our clients were already suffering from the distress of losing a family member to Covid. It is truly heartless for the Sri Lankan government to add to that distress by unnecessarily forcing the bodies of loved ones to be cremated. We hope that the United Nations Human Rights Council will take immediate action on receipt of this complaint by granting interim measures to halt these cremations.”

The MCB urgently requests that the UNHRC immediately order the suspension of the forced cremations policy.

Voices of the Victims (families) of Forced Cremation in Sri Lanka

Loved Ones Lost: The Pain Behind Forced Cremations

Loved Ones Lost: The Pain Behind Forced Cremations

COVID-19's tragedy has taken too many lives. We urge Gov of Sri Lanka to respect & accommodate religious faiths & cultural traditions, in accordance w/international public health guidelines, so that people can say farewell to their loved ones in ways consistent w/their beliefs.

Sri Lanka sticks to forced Covid cremation policy, despite revised advice from its own expert panel

Sri Lanka sticks to forced Covid cremation policy, despite revised advice from its own expert panel

The UK urges Sri Lanka to permit burials for #COVID19 victims in line with @WHO guidelines, so that all faiths can be free to practise their rites. I raised the issue with @DCRGunawardena last week & have shared guidelines on how burials can operate safely #FoRB https://t.co/FYs1uVIfhG 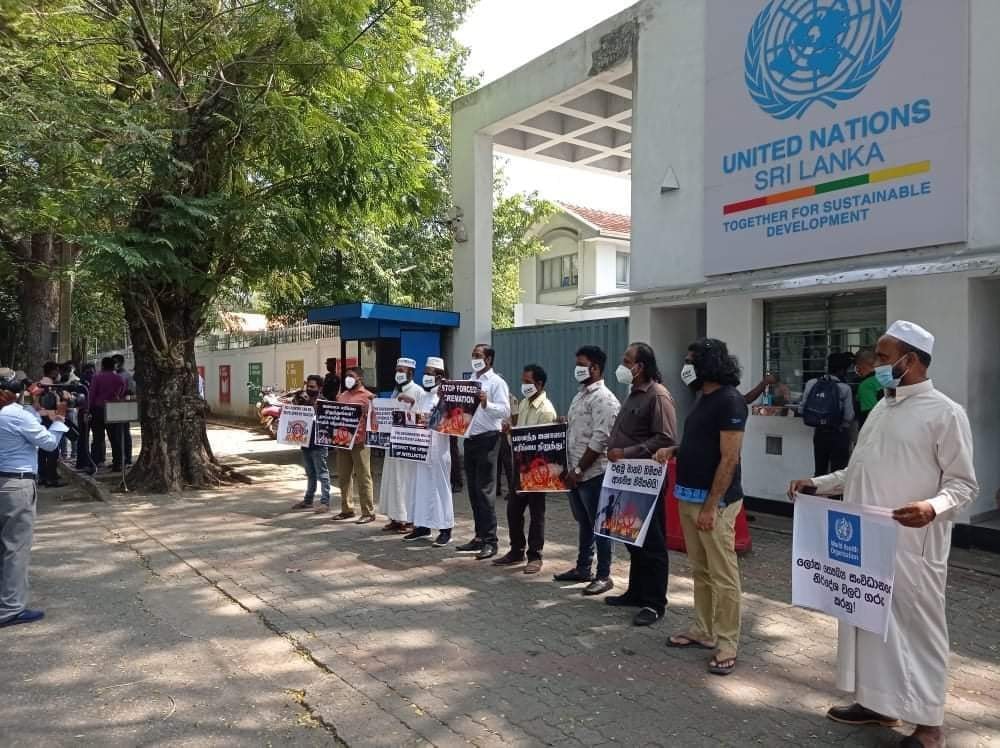 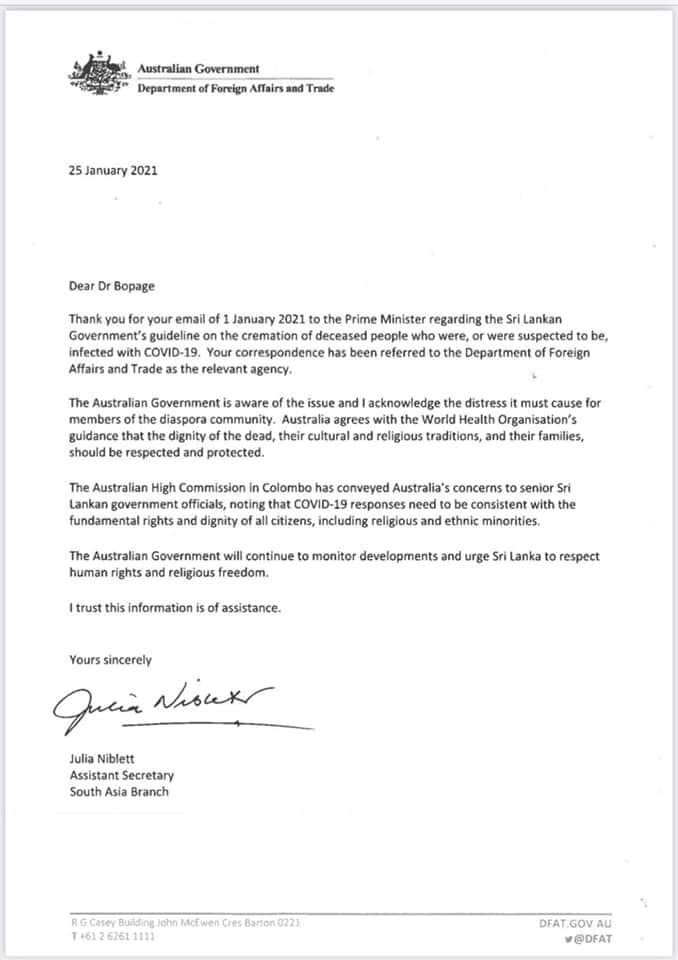 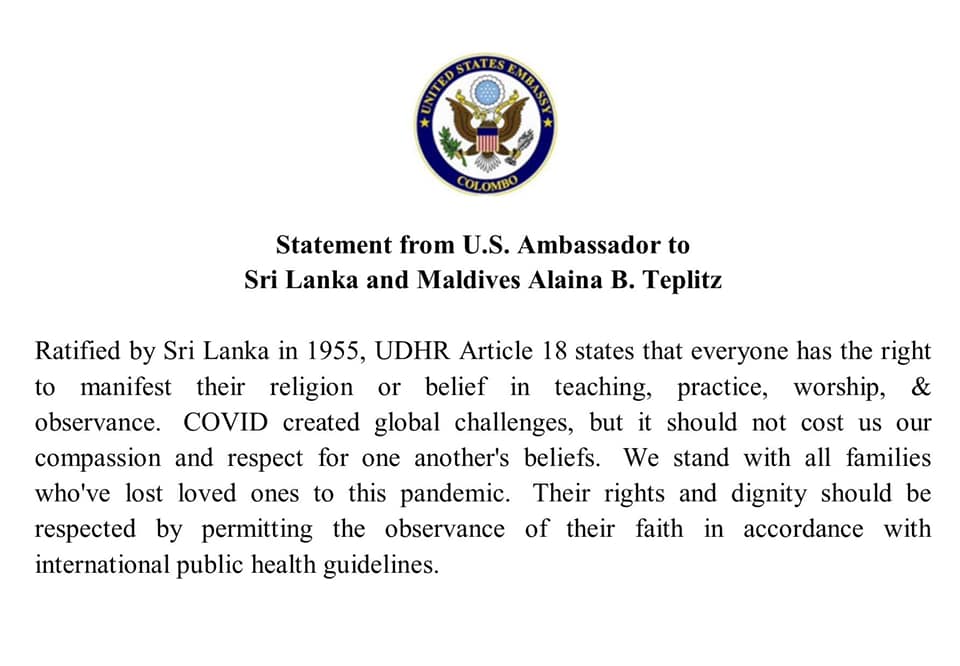