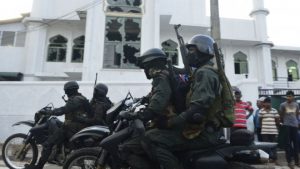 Sri Lanka has imposed a nationwide curfew for the second night in a row after a wave of anti-Muslim violence in the wake of the Easter bombings.

A Muslim man was stabbed to death while rioters torched Muslim-owned shops and vandalised mosques during Monday’s attacks.

Police have arrested more than 70 people, including the leader of a far-right Buddhist group.

The United Nations has called for calm and a “rejection of hate”.

“There were no incidents of violence overnight and we are arresting groups of people responsible for taking part in mob attacks,” he said.

Tuesday’s curfew came into effect at 21:00 (15:30 GMT). Police said the North-Western province, where the worst violence flared, will be shut down for longer.

Rioting in the province – north of the capital, Colombo – saw police fire bullets into the air to disperse mobs marauding through several towns.

More than 60 people were arrested in the province, while a further 14 people were detained in the Western province town of Minuwangoda.

Tension has been high since Islamist militants attacked churches and hotels three weeks ago on Easter Sunday, killing more than 250 people.

In response to the rioting, the UN’s Colombo office has urged Sri Lankan authorities to hold perpetrators to account and “ensure that the situation does not escalate”.

Sri Lanka has a history of ethnic conflict and the latest violence has triggered alarm.

Separatists rebels from the Tamil minority community fought a violent insurgency against government forces for decades until the civil war ended in 2009.

‘We are all living in fear’

One Muslim businessman told the BBC Sri Lanka’s Muslim communities were all “living in fear now” amid a widespread atmosphere of distrust and recrimination.

His factory in a northern suburb of Colombo was burned to the ground on Monday night by a rampaging mob.

The trader, who did not wish to be named, said around 200 rioters broke through his factory’s gates after running amok through a nearby town.

Once inside, he said they “started wrecking everything in sight”, shouting and screaming as they set tyres alight.

As police struggled to control the baying mob, several employees fled through a window, including one who suffered injuries after tripping and plunging 35ft (10.6m).

Security forces eventually calmed the situation and the mob dispersed, but not before devastating the factory.

“It seemed like they were really happy to tear our factory apart,” he said, estimating the damage to be worth millions of Sri Lankan rupees.

He filmed the extensive destruction wrought by the unidentified attackers, who he said were “100% racially charged to attack Muslims”.

He fears more attacks on Muslims are possible if the Sri Lankan government does not take precautions against the threat of racial violence.

“We’re afraid that this will be a Sri Lanka we don’t recognise any more,” he said.

Where has unrest broken out?

How have the authorities responded?

Prime Minister Ranil Wickremesinghe has appealed for calm, saying the unrest is hampering the investigation into last month’s attacks.

Visiting the riot-struck town of Kuliyapitiya on Tuesday he said he would not allow the lives of innocent people to be disrupted.

Leaders from across the political spectrum have called for calm and urged people not to share rumours via social media.

Officials have blocked some social media platforms and messaging apps, including Facebook and Whatsapp, in an attempt to curb outbreaks of unrest.