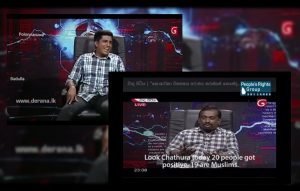 At one of the most challenging times in Sri Lanka’s Post –Independence history, when all communities irrespective of differences of race and religion are facing an existential threat, facing a common invisible enemy, it is deplorable that the Muslims of Sri Lanka are compelled to face an equally vicious enemy on another front- anti-Muslim hatred. This animosity is being deliberately mainstreamed by a powerful  Islamophobia lobby among the gross root levels, through social media and biased TV stations like Derana and Hiru. A well-orchestrated hate campaign is being carried out targeting and demonising the Muslims at this time, as unpatriotic and irresponsible, when this challenge of fighting the virus invasion, is calling for unstinted cooperation and a unified approach on the part of all communities. This vicious campaign, unless condemned and stopped by the Government of Sri Lanka (GoSL) and the law enforcement authorities, is proving to be and will prove counter-productive and self-defeating even in the short run. Besides, there is also an imperative need to punish those responsible who appears to engage in racist/ hate speech and crimes with impunity.